Home > Online > ‘Luchita Hurtado: I Live I Die I Will be Reborn’

‘Luchita Hurtado: I Live I Die I Will be Reborn’ 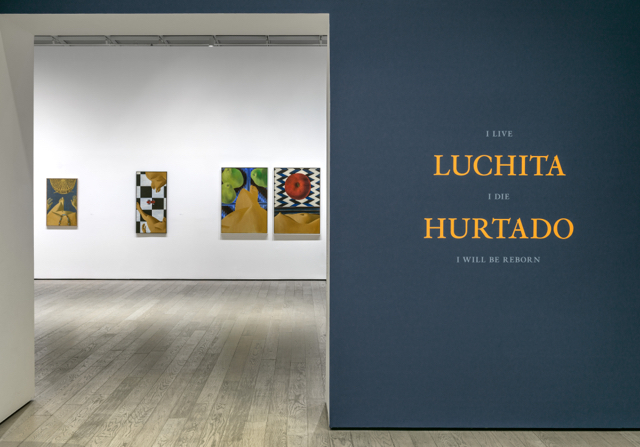 This past decade has offered several much needed feminist correctives to the twentieth century visual art canon. In 2013 when Austrian artist Maria Lassnig’s psychologically loaded work at the Venice Biennale was awarded the Golden Lion, it garnered an enthusiastic artworld response, especially in light of the fact that the artist was 93. So it is not surprising that over the past six years London’s Tate Modern has held several major retrospectives of work by women, from the lesser known, such as Mira Schendel, to the well recognised Marlene Dumas, Agnes Martin and Sonia Delaunay, to the known but not-seen-often-enough Joan Jonas, Anni Albers and Natalia Goncharova. Commercial galleries such as White Cube and Lisson have similarly stepped into the historical breach. Between 2018–14 they brought work by long neglected American artists Senga Negudi and Channa Horwitz to international audiences. In the USA, the Denver Art Museum opened an exhibition in 2016 to specifically highlight the many previously unknown women who worked alongside their male counterparts as Abstract Expressionists. It was quickly followed only a year later by New York MoMA’s exhibition ‘Making Space: Women Artists and Postwar Abstraction’. That same year, the Brooklyn Museum contributed to the dialogue with a show of radical Black women’s art from 1965 to 1985. [2]

Such acclaim, after years of neglect, may be gratifying for the individual women – if they are alive to see it. But in the case of artists whose work was excluded because of gender, ethnicity, or simply because it didn’t quite fit into the mainstream, it is the viewers who are the real beneficiaries when it is finally shown. Los Angeles County Museum of Art (LACMA), with its sprawling campus of buildings and collections, seems to have had all this in mind with its retrospective exhibition of paintings and drawings by Luchita Hurtado. Titled ‘I Live I Die I Will Be Reborn’, this exhibition of Hurtado’s work, also long neglected, was first realised at London’s Serpentine Gallery (23 May–30 October 2019) [3] before coming to the artist’s own home town.

It is a wonderful exhibit, and in unexpected ways. Contrasted with work by the nearly fifty-years-younger Julie Mehretu housed in the same pavilion, it lays the distinctions of time and histories bare. Mehretu’s work oozes with confidence in its sure, consistent trajectory of visual concerns, while ‘I Live I Die I will be Reborn’ acts as a historical ballast. Hurtado’s course appears more hesitant, and in that hesitancy, it does something else. If, as James Baldwin suggested, histories are trapped inside us, looking at Hurtado’s work from the mid-twentieth century onward is freeing because it allows us to see those times in all their complexity, of unpaid labour in the home, the uneven access and recognition of women artists’ work.

Hurtado’s biography is key. Emigrating from Venezuela to New York as a child, she was married at age eighteen to an older journalist, Daniel de Solar, who worked at the Spanish-language newspaper La Prensa, [4] followed by a divorce and subsequent marriage to Austrian surrealist émigré Wolfgang Paalen. In the 1950s, she met and married Lee Mulligan, a Los Angeles painter with whom she had two sons, John and Matt (the latter a well known artist associated with the 1970s Pictures Generation and a Cal Arts graduate). Because of these milieus, and having lived variously in New York City, Mexico City, Los Angeles and northern New Mexico, Hurtado was placed in proximity and friendship with prominent twentieth century figures from the art world such as Isamu Noguchi, Rufino Tamayo, Gordon Onslow Ford, Leonora Carrington, James Broughton and others. André Breton took her portrait. More than one article claims that Marcel Duchamp massaged her feet. [5]  The story of female artist as helpmate, wife and mother who consistently made her own art in the background was all too common, and excepting one installation at the Women’s Building in 1974, Hurtado’s work was rarely shown in public. In fact, she only started having solo exhibitions in 2016 while in her nineties. Completing this tale with a certain quotient of irony, it is worth noting that Hurtado’s work really came to view only after 1998 when the then studio director Ryan Good was archiving her diseased husband Lee Mulligan’s estate, and found her drawings and paintings tucked away within the collection.

‘I Live I Die I Will Be Reborn’ is not entirely reliant on chronology in its layout and that actually works well. The earliest and the latest pieces are on opposite interior walls, and in terms of years, the 1970s dominate. What is immediately apparent throughout is how Hurtado moved between abstraction, figurative work, and words as message and image. Upon entering the large hall and heading left, there were two series – mostly graphite drawings on one side from the 1970s, and across from them a series of nude self-portraits done in oils and begun in the late 1960s. One of the untitled drawings is particularly affecting. It appears to be two profiles of the artist, the faces tilted and turned to one another as if in conversation. Above the two heads are two minutely rendered feathers creating an X-shape. The lines in all these small drawings are the confident marks of some one who loves to draw, some one who knows when and what to detail and when to be economic.

The nude self-portraits in oils also use doubles of the artist, except in these works the figure is always looking down at her own body. We only see what she sees — fragments of a breast, a belly, a thigh, knees and hands. In some of the paintings, luscious renderings of an apple or some pears appear. In one (Self Portrait, 1971), a small, red, children’s toy car rests between the two models’ feet. Sections of background vary from what appear to be brightly coloured Navaho rugs to a black-and-white tiled floor, as if to remind us that these fragmented figures are in a home. It is a powerful work in the same way that Paula Modersohn Becker’s Self Portrait was, and is. Hurtado’s view of the female form is so deliberately seductive and at the same time so introspective and so cloistered, it acts as a social rebuke.

Then there are her oil paintings of sky. Painted in smoothly naturalistic colours, in Mascara (1975) the skies move from near black to Prussian blue to the palest robin’s egg blue. Feathers float in almost all of these works, and each one is framed by a rim of mountains, giving the images a dreamlike quality. To say that Hurtado is mining Surrealism is obvious, but, as with her nude self-portraits, she is also creating an uncanny viewpoint. It is the type of view one wishes one could have — lying down, tightly cradled within the centre of a mountain and looking upwards. 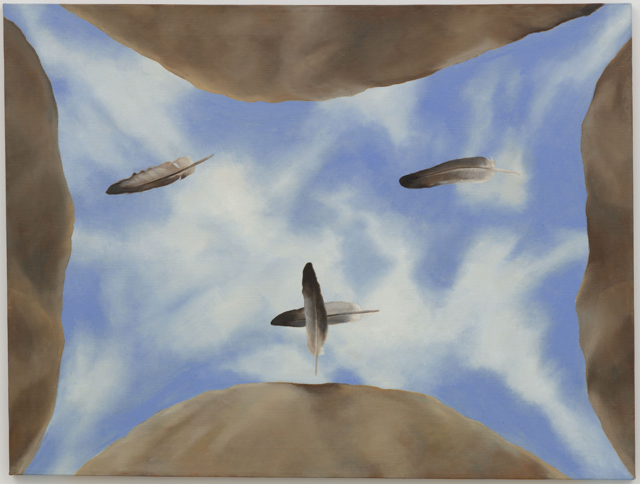 The second section of the exhibition is filled with abstractions, with six large, wholly geometric pieces, and it is here that one senses where Hurtado’s son, Matt Mulligan, may have gotten his penchant for the grid and repetition. They are arresting pieces, but the most interesting part of these works is not seen. In this series, the paintings were made from canvases that were cut and then both stitched together and attached from smaller squares. Although not discernible, the caption to one of these pieces (Self Portrait, 1973) states that the words ‘I live I Die I Will be Reborn’ are actually embedded within it. It is as if Hurtado was sending out a secret message, while at that same time domesticating the heroism of large abstraction. Across from these geometric paintings are a series of eight differently sized pieces on unstretched canvas fabric and in these words such as ‘YOU’ and ‘ME’ dominate. They are rougher in appearance. It looks as if the artist loaded letter and shape forms with white paint or gesso and pressed them deeply into raw canvas. While the works are a calm white and beige monochrome, the effect is one of a certain aggression as the raw canvases are buckled by the heavy imposition of imprinted marks. 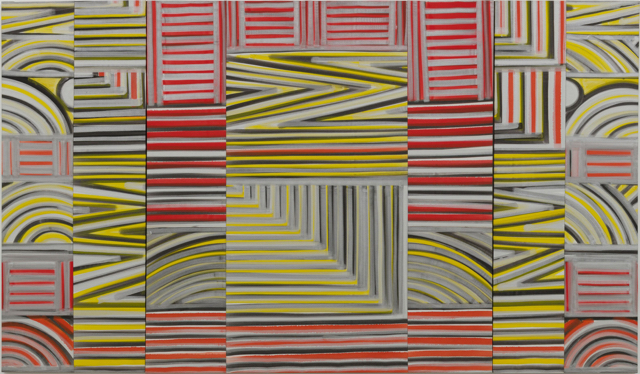 Luchita Hurtado, Self Portrait, 1973, oil on canvas and thread, 132 x 224 cm, courtesy of the artist and Hauser & Wirth, photo by Jeff McLane

A small selection of Hurtado’s pieces from the 1940–50s were on the east end of the exhibit, with an equally small selection of recent work on an opposite interior wall. This layout bookends the themes seen throughout the exhibition. Her earliest works are both abstract and figurative, referencing styles ranging from Henri Matisse to Wifredo Lam to Picasso. Yet it appears that by the 1960s Hurtado was consciously starting to insert her own life into her work. There is a 1966 untitled oil painting composed of a loosely painted female figure and child. The caption explains it was begun from a tracing of Hurtado’s and her son’s bodies. There is also a set of six small, mixed-media drawings done a year later that consist of abstracted torsos in blue and ochre tones. The figures are clearly engaged in depicting different positions of sexual intercourse, but the colour and forms are quiet, suggesting warm marital familiarity as much as passion.

One value of this exhibition is that it is a vibrant portrayal of an artist’s work that was seemingly unencumbered by the effects of the art market. In that light, viewing the relatively small but recent works from 2018 creates a kind of completion. These pieces are far from the delicate renderings the artist made in the 1960s and ’70s. They don’t have the painterly modulations or complex constructions of her middle years. Instead, they are made with urgent marks in crayons, oils, acrylics and ink, calling our attention to the environmental crises currently facing us. Female figures have arms spread out and the words fire, earth, air and water are repeatedly drawn on several of them. 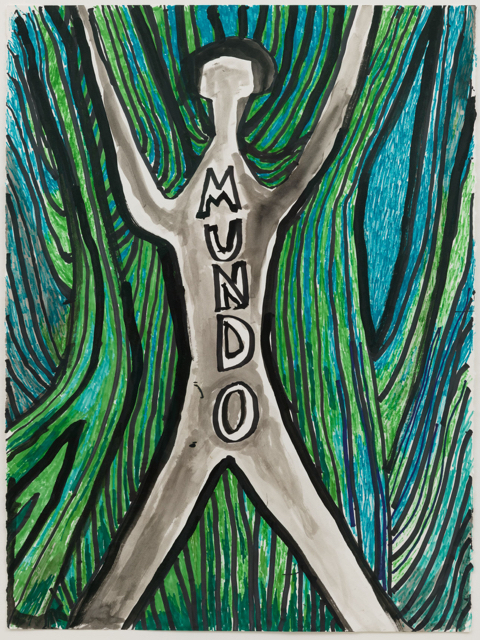 In the press release, curator Jennifer King claims that Hurtado’s ‘fiercely original practice developed almost entirely independent of mainstream styles and movements’, but the exhibition tells a larger story. Instead it appears that Hurtado was influenced by many of the styles and movements of her day – mid-twentieth century abstraction, Surrealism, post-painterly abstraction – but also by family, home and the environment. Going back and forth between the earliest work and the most recent, and looking at her various series in between, what is most important is how she interpreted the art idioms that surrounded her and made them her own. Hurtado’s individual viewpoint, whether in the self-portraits or the sewn-together geometries with embedded words, were responding to the times, the art world that she saw, and her private world as wife and mother. Because she wasn’t exhibiting that part of a cultural conversation might have been lost, but Hurtado was clearly watching and in dialogue with her peers. ‘I Live I Die I Am Reborn’ constitutes another needed cultural and historical contribution to the largely white male stories of twentieth century art. One hopes there will continue to be others.

[1]   However, the Museum temporarily closed its doors in March due to the COVID-19 pandemic crisis

[3]   In 2016, London’s Serpentine Galleries also organised, or co-organised, major exhibitions for Etel Adnan and Hilma Af Klint, two more artists who have also been absent from the accepted canons.

Frances DeVuono is an art writer, artist and former Associate Professor of Art at the University of Colorado Denver. She was a Contributing Editor for Artweek, and her reviews and articles have appeared in magazines such as Art in America, Arts, Art Papers, Sculpture Magazine and New Art Examiner, among others. She currently lives in Berkeley, California.